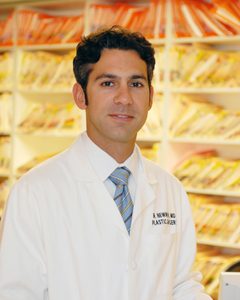 Dr. Newman is a board-certified plastic surgeon with offices in Beverly Hills and Torrance.  Dr. Newman performs the full spectrum of procedures including both plastic and reconstructive surgery of the face and body.  Dr. Newman is also part of the teaching faculty at the UCLA David Geffen School of Medicine, Division of Plastic Surgery and he is involved in several clinical research trials that allow him to offer the most up to date care.  Dr. Newman was selected for inclusion on the SuperDoctors Rising Stars list in 2013 and 2014 which was published in Los Angeles magazine’s Best of LA issue. He has received numerous awards including the Compassionate Doctor Award and the Patient’s Choice Award every year since 2010.

Dr. Newman obtained his undergraduate degree from UCLA and then moved to the east coast for medical training, including medical school at the University of North Carolina at Chapel Hill and basic science research at the National Institutes of Health. He then spent six years at the Medical College of Virginia (Virginia Commonwealth University) completing a combined general surgery and plastic surgery residency. Upon completion of his plastic surgery residency, Dr. Newman was selected to pursue additional fellowship training at Georgetown University Hospital with a focus on breast and cosmetic surgery including clinical instructor responsibilities. During his training, Dr. Newman was involved in numerous research endeavors leading to several publications. He has received various awards including membership in several honor societies.